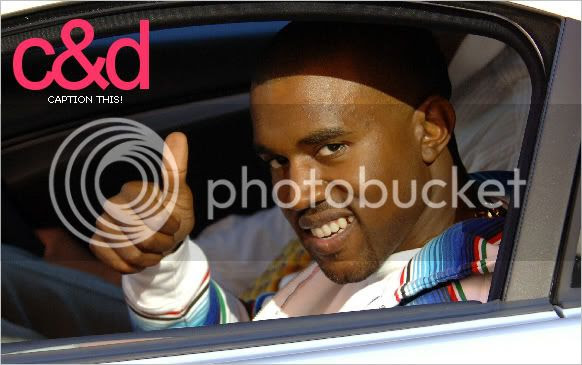 Ah snap, I think I just found a great 'thumbs up for last night's session' picture for the The Dealer. I am going to have to print this out later.

Kanyevil gave the thumbs up to photographers while out for a test drive in a Mercedes McLaren SLR. He picked up the car in near West Hollywood and with the salesman by his side, drove it to Beverly Hills and stopped to show his fiance Alexis before driving back to the showroom and being escorted into an office presumably to make a deal to buy the car. 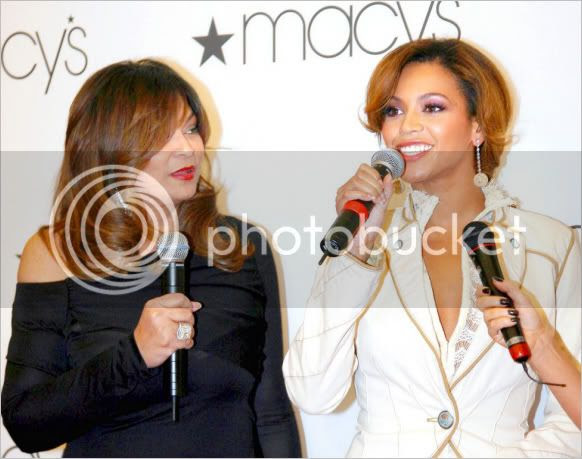 You guys know my policy. Usually I only do one Beyonce post per week since whenever her name is mentioned on this site (hence the playful moniker SWSNBN or She Who Shall Not Be Named), Stans come from the pits of hell and start to act a donkey in the comment section. Besides, every time she goes to the restroom and manages not to get piss on the toilet seat is just not that damn important to moi. And I still got love for the chick. But like so many people I care about in my personal life, I don't need to see her ass every day.

She's been having one hell of a week though. I just had to bend the rules this time.

I'm pretty sure everyone has seen the pictures of Beyonce feeling the after effect of champagne. Big fuckin' deal. Honey girl is from Houston! You know she probably drinks that potent purple punch out of Daniel's bottles and tips in and out of traffic in that Rolls Royce Big Dick Willie gave her for her birthday.
Shit. You know I'm trying not to curse so much but I can't help it. Moving along, video footage of Mama Tina cutting an interview short hit the internet today. When asked about sizing issues with certain items from HOD, she decided that she had enough and abruptly finished the interview. 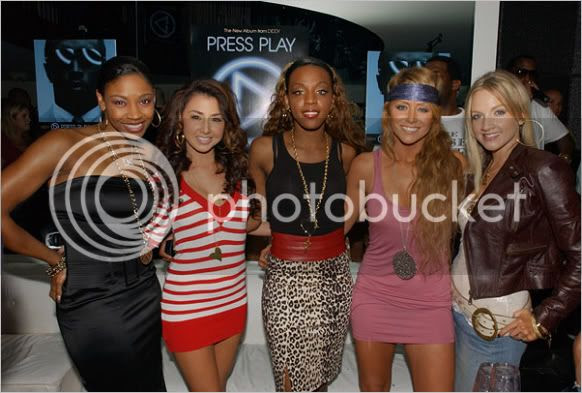 Okay, I let muthatruckers slide with the whole fanny pack debate earlier this week. After reviewing some of the different styles I can give folks a pass. However, if I catch you in the club with a piece of extra cloth from a Project Runway challenge wrapped around your head like Chocise from "The Warriors," I'm going to laugh and point directly at you.

This is a warning shot.

To the untrained eye these pictures appear to be from Irv Gotti's yacht party celebrating his new venture with Universal Motown Records Group that went down last night. Look here folks, I know and recognize a moof secret society gathering when I see one. You're not fooling me Irv. Send these people back to the crypt where they belong, pronto! If you open these pictures in photoshop and apply the mirror action you will see 666 on all of these flicks.

I remember dancing like this in my cubicle every Friday evening during my time as a BellSouth employee. Talking to country ass people all day long on the telephone about their DSL service will have that affect on you, trust me. Thanks KG for the laughs. 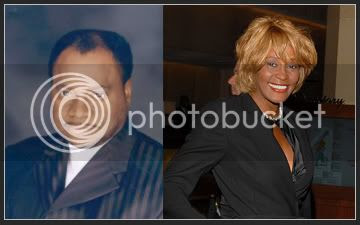 Reports of Whitney and Bobby's divorce shocked the entire entertainment industry. While many suspected trouble in the marriage, few believed that the couple would actually call it quits. But Atlanta Gossip, (AG) has learned that Whitney may have moved on from the relationship a long time ago. We've discovered that for months now, the golden-voiced diva has been cozying up with a popular Atlanta minister, Bishop Eddie L. Long of New Birth Missionary Baptist Church in Lithonia, Georgia.

In an exclusive interview, we spoke with a woman who claims that Whitney and the nationally renowned minister have been carrying on a "close private relationship." The source told Atlanta Gossip that the two met while Whitney was battling her drug addiction. According to the source, the minister served as a spiritual counselor to Houston. She explained, "at first [the minister] was just helping Whitney with her addiction, then the next thing you know they're going on weekend 'retreats' together."

But there's a big problem with Whitney's new "relationship" - the pastor is currently married with children. Our tipster, who is also a close friend of the minister's wife, told us, "what Whitney is doing is just plain wrong, that man has a family." And she offers a stern warning, "I'm not accusing anyone of anything yet, but [the minister's wife] is not just going to sit back and let Whitney steal her man ... if stuff needs to get ugly, it will." Developing . . .

You already know the deal. We don't believe you, you need more people.

I'm not trying to question the credibility of AG (okay, maybe I am just a little) or put them on blast but I have yet to see an official website, blog, or messageboard from them. All types of ridiculous rumors have come from the group in the past.

You can believe what you want to but I'm having a very hard time seeing the truth in this.

Labels: All Types of Wrong

Rihanna has the quintessential mean mug in these pictures that often leads men in nightclubs to ask "Damn girl, why you look so mean?"

Between me and you, T.Error Mari called me last night and said that she spotted Rihanna's car at the airport and asked if I wanted to help her key it up and throw a brick in the back window. I told her I don't get down like that any more and to hit the Young Gunz up. It's not like they are doing shit right now either.


Your Two Cents Required: An ATM For Jesus

Jazlyn emailed me this story earlier this morning and I just had to share it with you guys. I can't wait to read your comments about this one. I bet they have one of these at the Temple of Jay Hova.

Pastor Marty Baker preaches that the Bible is the eternal and inviolate word of God. On other church matters, he's willing to change with the times.

Jeans are welcome at Stevens Creek Community Church, the 1,100-member evangelical congregation Baker founded 19 years ago. Sermons are available as podcasts, and the electric house band has been known to cover Aerosmith's "Dream On." A recent men's fellowship breakfast was devoted to discussing the spiritual wages of lunching at Hooters.

It is a bid for relevance in a nation charmed by pop culture and consumerism, and it is not an uncommon one. But Baker has waded further into the 21st century than most fishers of American souls, as evidenced one Wednesday night when churchgoer Josh Marshall stepped up to a curious machine in the church lobby.

It was one of Stevens Creek's three "Giving Kiosks": a sleek black pedestal topped with a computer screen, numeric keypad and magnetic-strip reader. Prompted by the on-screen instructions, Marshall performed a ritual more common in quickie marts than a house of God: He pulled out a bank card, swiped it and punched in some numbers.

The machine spat out a receipt. Marshall's $400 donation was routed to church coffers before he had found his seat for evening worship.

"I paid for gas today with a card, and got lunch with one," said Marshall, 30. "This is really no different." (
continue)

Vivica made a guest appearance in the Jubilee! show at Bally's in Las Vegas last night. The classic show is celebrating its 25th anniversary. Now this is the Aunt Viv I enjoy seeing. Not the one pussy poppin on stage with incoherent rappers at award show ceremonies trying to prove she still sexy. 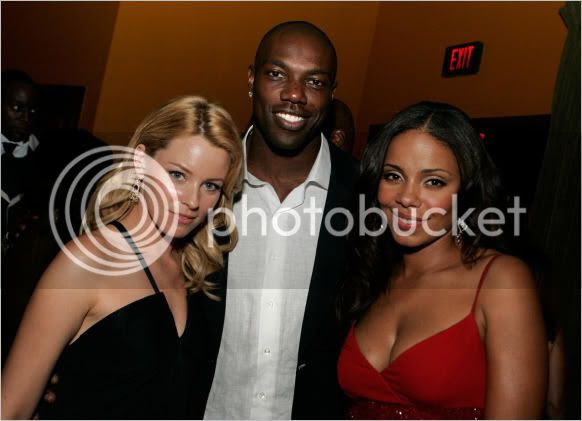 Elizabeth Banks, Terrell Owens, and Sanaa Lathan at an after-party for the 2006 ESPY Awards

Could a sizzling hot romance be bubbling over for Sanaa Lathan and Terrell Owens? That's what the latest rumors around the net are saying. The actress was allegedly seen a few months back out in Oxnard, California while Winston the danger kitty tossed around a few balls, ahem, at training camp. In a recent interview with Upscale magazine, Sanaa remained mum when asked about her love life.

"Yes, I am dating and I'm having fun," she says with a smile, while sending an e-mail on her BlackBerry. "I met someone recently [who] I kind of like, but it's too soon to tell. You know how that is!"

I'm looking forward to see what new rumors will develop next out of this. You know certain gossip sites are going to have a field day with this. I hope that Sanaa is by his side right now to make sure he is taking the correct amount of his meds. For more juicy details on this story check out Young, Black, and Fabulous.

Monica performed "Everytime The Beat Drop" along with Jermaine Dupri (he needs to go back to the crypt already) and Dem Franchize Boyz yesterday on the 106 & Park stage. Those kids definitely burned some major calories during the performance.

Since there are so many songs dedicated to random shit, why not have one for the jump off chicks on Myspace? I've already booked studio time this weekend to record a song about different styles of maxi pads, or as my Granny would say sanitary napkins. You like the flexi-wings? Yup! You like the overnights? Yup! You like the scented ones? Yup! You like four wall protection? Yup!

All I need is a "tight beat" and I'll guaran-damn-tee you I would have the 106 & Park generation leaning and snapping their fingers. Thanks Shonna for the video!

One more thing, why does this nigga have a shirt with "Rat Poison" written across it? Is that's what's poppin' in the streets (apparently along with fanny packs) now?


American Woman Stay Away From Me 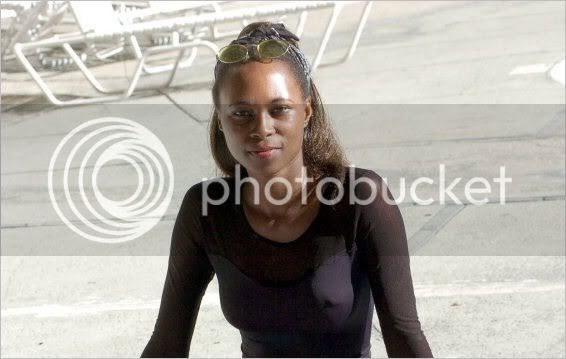 Remember this dusty looking broad? She is the woman accused of stalking actor Colin Farrell. On Monday, Dessarae Bradford apologized for confronting him during an appearance on The Tonight Show in July. While she admitted her actions were overzealous, she insists that the relationship between them was real.

A Los Angeles Superior Court judge ruled in July Bradford must keep at least 492 feet away from Farrell until the court hearing last month.

The restraining order has since been extended to 2009.

I'm not sure what the creative concept of this week's challenge was since I didn't watch the entire episode. But judging from the Bronner Brothers Hair Convention type of shit going on with the girls' hair I don't think I want to know. As you can probably already tell I'm not connecting with this season very well. I'm sure that some of you can't wait to express your opinions about the makeover drama. I know Dex falls into that category :)

Chingy gets some help from JD in the new video for his ode to ladies in denim, "Dem Jeans". Certain parts of the clip reminds me of the "Right Thurr" remix video.

And speaking of another song with an almost identical title and concept, who could ever forget the greatness that was Master P's "Them Jeans"? The lyrics I'm country / you country / we country / come closer its a free country still send chills down my spine to this day. God bless Percy Miller.

Girl grab the wall then shake it like a dog. I think I'm having a moment here.