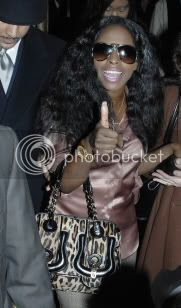 Incarcerated rapper Foxy Brown has asked a New York judge for an early release from the Rikers Island correctional facility so that she can travel to Hollywood to receive treatment for her hearing problems.

According to the New York Daily News, Fox attached a handwritten note to a motion filed by her lawyer requesting that sent Judge Melissa Jackson grant the release in time for a January 30 appointment.

“I am terrified of not hearing a fire alarm go off, or being locked in a cell, and someone not being kind enough to let me out, since not everyone understands the severity of my condition,” she explained in the letter. Foxy underwent special surgery in 2006 to treat her sudden and sever hearing loss.

Now, the battery on a hearing device she uses has malfunctioned. Her attorney, Laura Dilimetin, noted in her motion that there may be “one or two places” in New York that can fix the cochlear implant, but the Los Angeles based House Clinic is the only place that can properly repair the device. [source]

I feel for her but should've thought about all of this before she jumped bad and had to be place in isolation for 76 days for shoving another inmate. That sounds like a personal problem, Inga.

Labels: Sucks To Be You