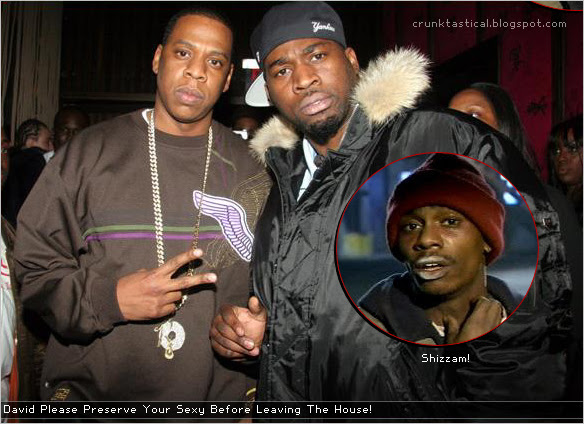 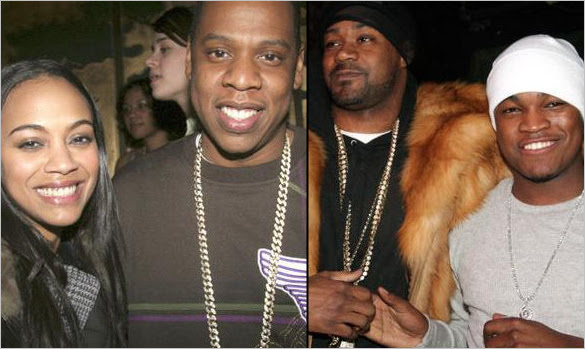 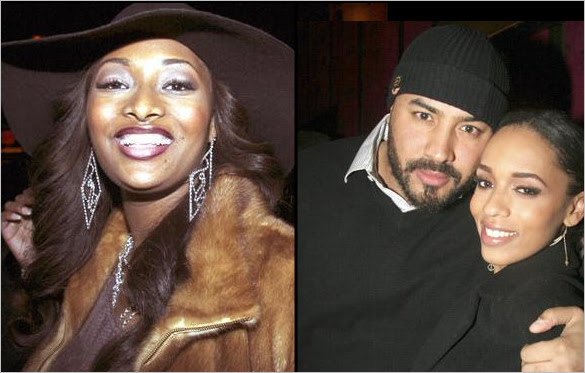 Get the full scoop at Cake and Ice Cream

Is Whitney Going To Have Another Nimpho Babby? 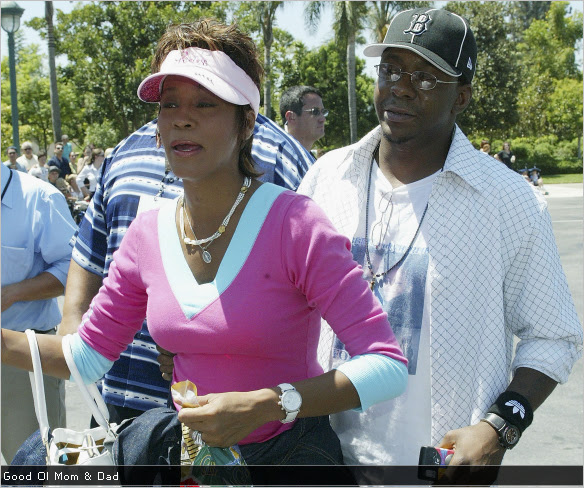 R&B bad boy Bobby Brown has hinted his wife Whitney Houston is pregnant with their second child in a new interview. Speaking candidly to urban magazine Sister 2 Sister, the My Prerogative singer let's slip that his wife is "resting up" at home in Atlanta, Georgia.And, following reports the couple has split, Brown is happy to report they're planning on becoming parents again. He tells the publication: "I'm hoping that she's pregnant right now... She's just resting." (via D-Listed)

God I hope this isn't true. I love Bobby and Whit like the next person but could you imagine those two raising another child? Now that would me some must see tv for your ass. They would be too high to take the kid to their first day of school. Poor kid would probably come out looking like a cross between Flava Flav and Ne-Yo's mom.
POSTED BY FRESH @
1:46 PM


Pumkin Tells Her Side 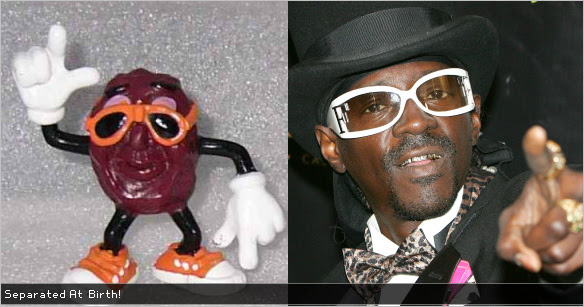 Thank you Jai for this great observation! Now moving along, Pumkin wrote about spit gate on her myspace blog. Check it:

Yeah . . . I Can Spit! So, what?
Ok . . . so as most of you know, I was eliminated last night from Flavor of Love. I know . . . so sad :-( Anyway, this is really what went down that night. My mom came and met Flav and told him that I had been on game shows and dating shows before. Big surprise, huh? I mean, after all, the producers knew about every girls past experience on tv and each one of us have definitely been on something before! So, I was pissed because Flav was calling me out when he already knew what was up. I mean how can Flav sit there and question my intentions . .. look at his track record. Surreal Life, Strange Love, Flavor of Love . . . all reality shows, hmmm? I was pissed because he was being a hypocrit in my eyes. I was telling him that he had a pot of gold left and a pot of shit left and I hope in the end he goes with the pot of gold. New York butted in saying her usual and for me to go get a face lift. Well, I just did what everyone else wanted to do and wanted to see. So, I spit in her face. No, she did not hit me. No she did not really push me. My clutzy ass tripped over the rug in my high heels. Regardless of what happened, the bitch deserved it and the show went on. So, please understand that I am not a bad person . .. I am normal and when people press your buttons sometimes you do things out of character. However, I have absolutely no regrets! 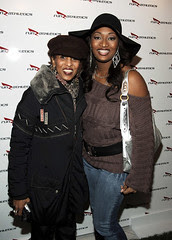 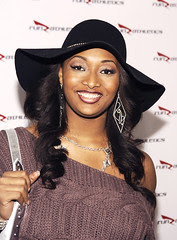 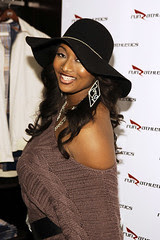 Check out more pictures of Tocarra at Cake and Ice Cream

Naima At Launch Party For The New Heineken Premium Light 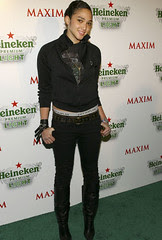 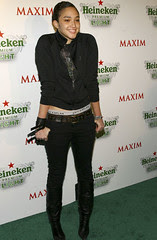 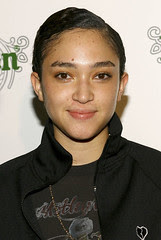 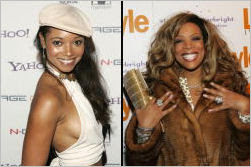 Actress Tamala Jones graces the cover of the latest issue of the men's magazine SMOOTH and in the piece, penned by this columnist; Jones has some choice words for syndicated radio talent Wendy Williams. While Jones is quite clear about her disdain for the New York City-based shock jock, the comments that weren't included in the article make what Jones said in the piece look mild in comparison.
In the eight-page spread, Jones acknowledged that it was Williams who caused singer-rapper Nate Dogg to call off their engagement. "That little s-t Wendy Williams has never met me. She's never sat down and said, 'Tamala let me get an interview with you.' I understand she's like a gossip person, but even the ones that write in the tabloids and even the ones that really want the story are classy. She's a classless woman who doesn't even know by her mouth what she can do to a person's life. Forget the relationship, what she can do to a person's life. She doesn't even know how much s-t she's done contributed to that's been messed up for me based on her comments that are not fact," says Jones.
Jones adds she doesn't know how a person she's never met nor had a conversation with could create stories about her and tell them like they are fact. "She doesn't know anything about me. I can see if she'd hung out with me or had firsthand knowledge, but some of the s-t that she says about me, like, 'Tamala's like a doorknob, everybody's gotten a turn.' B-h, you really don't know me," rages Jones. "She's basically saying that everyone I've worked with I've f-ked. That's a damn lie! That's the golden rule in Hollywood: You don't @#%* your co-stars or you @#%* yourself!" (continue reading)
POSTED BY FRESH @
10:29 AM

Mos Def At The Premiere Of "16 Blocks"

Look at these two decrepit, babygirl-do-you-know-who-I-am, pied piper ass mutafuckas right here. I remember back in the day my older cousins would faint in front of the television and pratically cream with delight over these two . . . now look at them. Aaron Hall's ass looks like he just got out of jail half a second ago, peep the glasses ya'll. I bet he goes home and sings "I Miss You" to the mirror about his looks. Keith Sweat looks like that brother at the bar who tries to convince everybody that he still is 29. I had to do a double take because I thought his ass was holding a brush so he can touch up his waves. Its a damn shame. If I didn't know any better I would think this was a photoshop trick, but I dont think anybody skills are this good. See more of these old school playas at CL. Guy, WTF?
POSTED BY FRESH @
3:57 PM

Is Vivica the new Paris Hilton? I opened a box of tampons this morning and she was standing in the press area of my bathroom smiling and waving.

The New York Post reports Beyonce and Tina Knowles' House of Dereon fashion line was poorly represented at the Magic fashion trade show in Las Vegas. The company's booth, which was meant to resemble a villa, was shoddily made, a spy told the paper. "It was so cheaply done, the vines were visibly Scotch-taped to the villa," the source revealed. "It was very un-Beyonce." But a spokesman for the company disputed the claim, insisting the booth was professionally constructed, adding, "It won the contest for the best booth in the contemporary area." (source)

+ Lindsay Lohan moves to Motown and Madea number one at box office
POSTED BY FRESH @
12:24 PM

You know blogging has really become a big thing when MC Hammer jumps on the bandwagon! His blog is filled with a lot of pictures of his children and a post here and there. He even has audio posts! I'm pretty sure there is a method to his madness so I won't ask any questions. Well, maybe one. What's up with these big ass shoes on the baby? Thanks Ricks for the info!

Words of Wisdom From Hammer

Anyone can funk and go to war, we all got soldiers but it takes real men to make peace. Peace may not sell these squares' magazines but it can save a community and bring prosperity to our people.

Hammer today, Todd Bridges tomorrow, and Bobby Brown the week after.
POSTED BY FRESH @
10:26 AM

(all pictures obviously via Sandra Rose)

Ne-Yo's Mama = Mother of the Year

Everybody has that one friend whose mother is cool as hell. She let's you smoke in the house (hell she might even join you), have sex in her bed, washes the sheets for you afterward, and doesn't pressure you about going to school nor mapping out a future for yourself. I'm not saying that Ne-Yo's mom fits that description down to a tee but I wouldn't be surprised if she did. I love her already! I'll take this lady over Tina Knowles any damn day. Clearly you can see that she is just so proud of her son. Brings a tear to my eye knowing that maybe one day I can feel the same way. Cheers to you mama.

But you have to wonder though, who would win in a three way fight between Janice Combs, Ann Iverson, and Ne-Yo's mom?
POSTED BY FRESH @
2:53 PM

(click here for another picture)
Okay okay, so once upon a time I used to call Miss Cece "Uncle Ciara." But the girl has really stepped her game up lately. I think she looks very nice and sophisticated. Now if she can just get rid of Bow Wow's little bit size ass she'll really be in the game. I'm mad that Gettyimages called her "Chara" though. They also described a picture as 'a model displays creations by fashion ho' but I'm sure that was a mistake.

The time has come for Flava to take a damn bath. Yet another reason why I will never pick up a crack pipe.