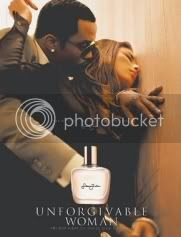 A new TV advertisement for Diddy's flatulence fragrance Unforgivable may not run on MTV, after the network censored the commercial due its provocative content. According to the New York Post, the new spot features Combs and model Jessica Gomez lustfully embracing each other in a hotel room and a stairwell.

During the spot, Combs pulls up Gomez's skirt and puts his hands under her dress. In another scene, a woman holds Gomez's breast and pulls down her underwear. West Coast Productions, who?


Executives at MTV objected to the racy spot and sent Diddy a list of edits to make to the commercial before it is allowed to air on MTV. So far, he has refused to edit the commercial.

That poor, poor model. I know the side of her face had a third degree burn on it after shooting for the commercial was complete. Janice Combs, get your son.
[source]