Diddy's ATL Baby Mama Speaks
Sandra Rose spoke exclusively to Sarah Chapman, the mother of Diddy's first daughter who turned one last week. In a recent interview with Essence, Kim Porter confirmed that the existence of another baby girl and Sarah. 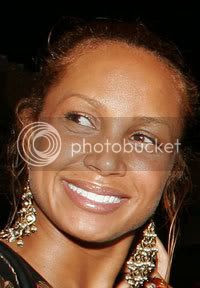 Sarah's response to Kim's assertion that she didn't know her: "A lot of what you said is true about me and Kim. There's so much more to the story than that. She definitely knows who I am," said Sarah. "Yes, it's true, we've had words. [Kim] knew about my pregnancy prior to her getting pregnant. In fact, Kim and I met [Sean] at the same time."

Sarah stressed that she doesn't seek out the spotlight: "That's not for me. I don't enjoy that. I'll let Kim have that"

About her longterm relationship with Sean, Sarah said, "He and I are friends, we've always been friends. I've known him for a long time - 13 years exactly. Sarah adding that they dated "on and off" over those years. "I know it sounds very cliché, but we really are friends. It's never been a situation where I'm trying to step on top of [Kim] or I'm trying to be in her position."

Sarah expressed surprise that Kim dropped her name in the Essence interview. "She threw my name in that shit," said Sarah, raising her voice slightly. Regarding Kim's revelation that Kim didn't speak to Sean Combs about Sarah's baby until after her twins were born, Sarah said, "the scary part is that any woman can be with a man and not even mention to him 'oh, I heard you got another woman pregnant' - that's really scary. For the longest time she never mentioned my pregnancy to him. She kept it a secret to herself so it wouldn't take the shine off of her," said Sarah. "I thought [Sean] was lying, but he said Kim never mentioned my pregnancy to him."

Sarah stressed she wanted the opportunity to tell her side of the story in a national forum. "I don't have a voice," she said softly. "I don't have a forum to speak about my child. He has the forum. I'm not a superstar, he's the superstar. He's theperson that should be out there acknowledging his child. I'm going on with my daily life and raising my child. We do what we do. We go to Sesame Street and the zoo," said Sarah.