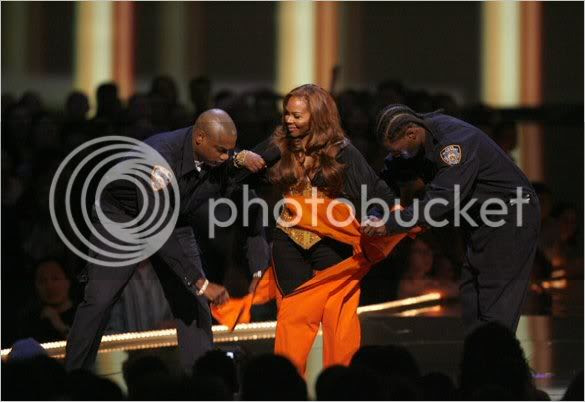 It's your turn to speak on the this year's MTV Video Music Awards. All opinions are welcome just don't get reckless.

It's been a long day for this army of one and to be frank, I quit this bitch. See you tomorrow.

So this is the plan. I'm going to update this one throughout the night with pictures as soon as they hit the different image services. So every now and then refresh your browser.

BET's Access Granted cameras caught up with T.I. and Jamie Foxx on the video set of the song "Live In The Sky." Here's the video for the track that appears on T.I.'s King album. The Forest Whitaker Chris Robinson directed clip is takes a cinematic approach.

High quality pictures are evil.
For instance. Diana Ross sung for the naming of the Billie Jean King USTA stadium yesterday. I'm sure she was her usual dramatic cunt self, but I love it. I'm just scared of her.

Eve went all Hollywood on us and never came back. Oh well, at least she isn't stealing belts and taking trips to jail. She attended Paris Hilton's album release party this past week out in Las Vegas. I hope she has a good bodyguard just in case her ex-boyfriend decides he wants to roll up.

Whitney Houston appears to have rid herself of hubby Bobby Brown. Whether he gets back into the house may depend on hip-hop temptress Karrine Steffans.
Houston's friends have long blamed Brown for her woefully heavy eyelids. So they're praying she has the strength to change the locks. . .

Lately, she's been seen around L.A. with him. So what's up with them? "It's a really tricky situation," she told us this week, as she test-drove a Mercedes SLK 280. "He is my dearest friend. But I'm not saying it's romantic. We won't know what it is till we're ready.

"There's a wife and children involved," the single mom went on. "I don't want to wreck any marriages. But if a marriage is already wrecked, that's not my fault." So she and Bobby have been intimate? "It's none of your business," she scolded. "I'm still celibate. And if you believe that, I'll tell you another one."

"Look," she said, shifting the Benz into a higher gear, "there are way bigger things in the works than a romance. I'm a businesswoman. Bobby and I are working together on some things."

Somebody told online gossip Janet Charleton that Karrine is "using Bobby because she wants her own reality show.""Please," she said. "You think I need Bobby Brown to get a reality show? I've turned down four reality shows." (continue)

Tonight is the big night! Are you excited to see what is going to happen? I would be a liar if I said that I wasn't looking forward to the performances at the awards. The stars have really been filling up the Big Apple with parties, that's for sure.

Solange and Mama Tina took a break from circling around Miss Jones's block and went out to Las Vegas for the Magic Expo. Solange looks nice with darker hair. Buffie . . . I don't even know. Big Booty Judy, ya'll. Spanky looks like he just got finished stealing somebody's lawn chairs to pay for that shirt. Not a good look at all.


Robin Thicke - Lost Without You Video

It's about damn time! I've been waiting on an accompany video for this song what seems like forever. The new video features his beautiful wife actress Paula Patton. I love this white boy, I really do. (spotted at Concrete Loop)

Mariah Carey took home two awards last night for her hit song "We Belong Together" and Songwriter of the Year, along with Miami-based producers Bigg D and Jim Jonsin. Kenneth "Babyface" Edmonds and Antonio "L.A." Reid were named BMI Icons for their influence of Chinese slippers and lip gloss on today's metrosexual rappers. Just making sure you were paying attention. But the two were recognized for their "enduring influence on generations of music makers."

Kanye West earned producer of the year and Jazze Pha's "1, 2 Step" won the topped spot for BMI Urban Ringtone Award. Damn, they give away awards for that shit now? Click here to see to find out who else won awards.