Will Star Jones Leave "The View" In September?

Rosie O' Donnell and Star Jones don't exactly send flowers to one another on their birthdays. Star has been the butt of many of Rosie's jokes in the past, especially concerning her rapid weight loss. This is going to be pretty damn interesting to see how things play out between the two. Some people are speculating that Star will be resigning from the show in September since that will be the same month her contract with ABC is up. We'll just have to see how things play out.
. . . In the interview, which was mainly to promote a documentary she had done for HBO about a cruise for gay parents and their children, Ms. O'Donnell was asked by Diane Sawyer to free associate in response to the names of several celebrities, including Tom Cruise. When given only "Star Jones" as a prompt, Ms. O'Donnell responded, "An interesting woman on many levels," before looking directly at the camera, raising an eyebrow and laughing.

"I don't wish her any ill will," Ms. O'Donnell said, before adding: "I think it's very hard for everyone to participate in the illusion she presents as her truth." "You mean about the weight loss?" Ms. Sawyer interjected, an apparent reference to the radical change of late in Ms. Jones Reynolds's appearance, as well as, perhaps, her recent medical treatment for complications following a plastic surgery procedure.

Here are some pictures of Star showing off them tittays and the oh so fabulostic Al at the Daytime Emmy's : 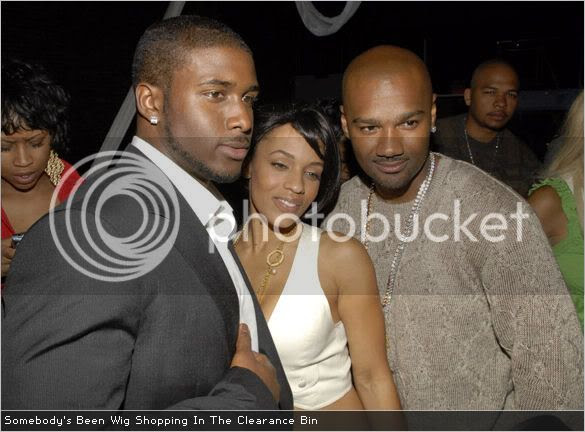 Melyssa Ford has been looking a lot like the black Tara Reid lately and that's not a good thing. Seriously, doesn't she look like that one friend we all have that gets trashed everytime they set foot in the club? And that I'll-take-your-ass-down-to-Chinatown quick weave isn't helping the cause by any means. If she's going to go for that crazy, crackhead in the morning look she's hit it right on the head. Even the people around her look nutty. Hated it! 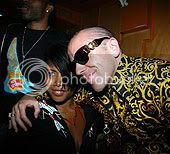 50 Cent Sounds Off On Oprah 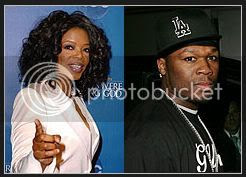 Ya man 5-0 is the latest rapper to sound off about his beef Oprah . . . and I doubt he'll be the last. Shit, I expect a "Fuck Oprah Radio" mixtape cd hosted by DJ Drama by the end of May.

He usually saves his beefs for other rappers; this time, 50 Cent is going after Oprah Winfrey. In an interview with The Associated Press, 50 complained that Winfrey rarely invites rappers on her talk show: "I think she caters to older white women. Oprah's audience is my audience's parents," the 29-year-old rapper said. "So, I could care less about Oprah or her show."
He's not alone in his resentment toward the talk show host cum media mogul. Rapper-actor Ludacris, aka Chris Bridges, said in the May issue of GQ magazine that Winfrey was "unfair" during a show he appeared on last October with co-stars from best-picture Oscar winner "Crash." (continue)

Now I can see where Fiddy is coming from but if he didn't care about Oprah then why would he even talk about her? Boy stop.
POSTED BY FRESH @
6:47 PM 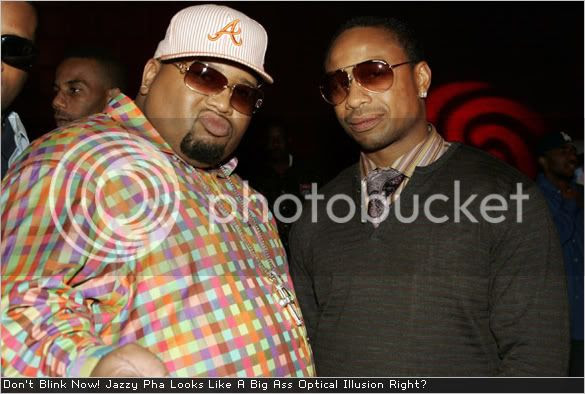 
Could This Be The Beautiful Beginning of Tylra? 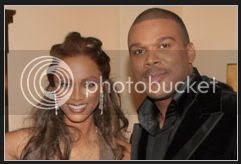 Tyra Banks may be well on her way on the I-got-some-delicious-penis-last-night-so-Chernobyl-could-happened-and-I-wouldn't-care road to happiness. And for that I am happy for her.
MediaTakeOut.com has learned that model and TV talk show host Tyra Banks has finally landed the man of her dreams - the famed writer/director Tyler Perry. According to recent reports, for the last month Tyra has been chasing Perry around the country in an attempt to get his attention. Now finally Tyra appears to have gotten through to the cross-dressing comic. In recent photos taken at a Los Angeles eatery, the new power couple is seen kissing during a romantic dinner. And a pal of the America's Next Top Model host wasn't shy in explaining to MediaTakeOut.com exactly how Tyra managed to snag the eligible bachelor. She told us, "Tyra was relentless, she saw him - she went after him - and now she has him." She went on to say that "Tyler has really fallen for her, he's already considering relocating to Los Angeles [from Atlanta]." (continue)

Tyra and Tyler (gosh that sounds so sweet) have been linked for months now. I just hope that she wasn't really chasing his ass around the damn country. I promise you that its not that serious. I guess that white boy she was smooching is long gone. *makes a phone with fingers*

Don't forget to check out Rich's ANTM recap. They're in Thailand and it's a celebration.

So if you haven't already heard, Cam'ron has been texting Beyonce something crazy lately. Since I don't have spies like others gossip sites I'm going to assume that this is how things went down. 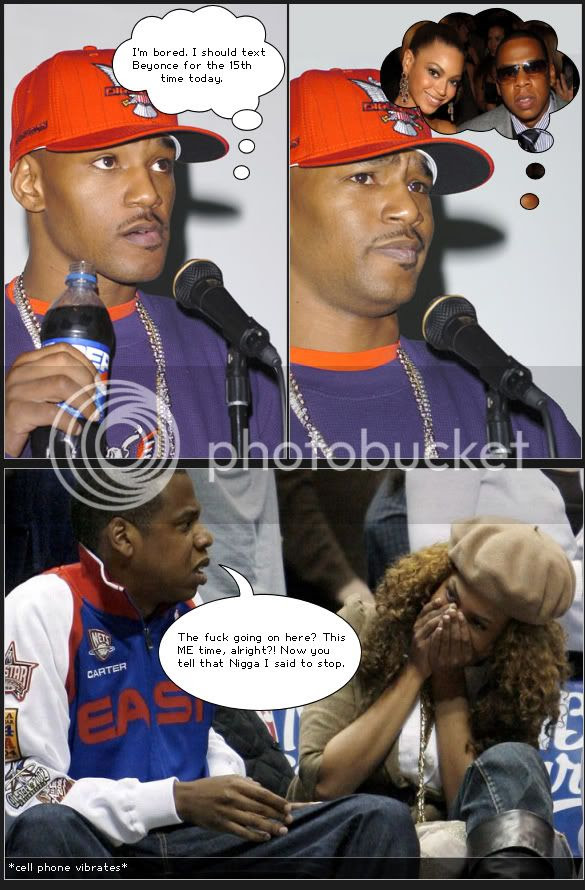 Alicia Keys On The Set of New Movie

Whenever I see Alicia Keys I think about of three of things: First that Audrina girl from 'College Hill', then Proactiv, and last but not least that fucking "Unbreakable" song. Here are some pictures of Alicia on the set of her movie "The Nanny Diaries", which looks like its going to be incredibly corny. Like on some 'The Babysitters Club - The Series' type shit. I hope she does a great job though!
POSTED BY FRESH @
10:05 AM

Omaroacha Talks About Her New Titties, TomKat, And Everything In Between 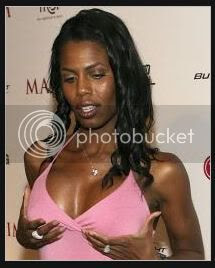 The ubiquitous Omarosa Manigault Stallworth told BV Buzz that while she's not ready to tender her crown as the Queen of Reality Television, there is one title she just conceded. "I have officially relinquished my title as the president of the Itty Bitty Titty Committee," she boasted over dinner at Clyde's of Gallery Place in Washington, D.C.

Wearing a low-cut red and yellow gown by NuMe designer Victoria Shaffer, Omarosa proudly showed off her new bodacious bosom. "For the first time in my life, I have cleavage," she said smiling, before admonishing: "Stop looking at my cleavage!" After my apology, she added that this was the first time she had cleavage that she didn't have to manipulate herself before leaving the house."Cleavage that is not constructed by a Victoria's Secret pushup bra, silicone cutlet inserts or taping my boobs together. I'm so happy to have natural cleavage," she said.

Her transformation from "a negative A-cup" to a "full voluptuous C-cup" was documented for television and will appear on a forthcoming episode of the Discovery Health series 'Plastic Surgery: Before & After.' Omarosa's mother, Theresa Manigault, is also featured on the series. "I treated my mother to a total makeover. The makeover of her dreams," Omarosa added. (AOL BlackVoices)

Coming to a King magazine swimsuit edition soon. . . I hope not.

Now, this is some crazy s**t! I'm getting word that the esteemed members of the Parks family are on a crusade (led by her nephew) to have Proof's body removed from Detroit's Woodlawn Cemetery Chapel where she is buried because its presence is "disrespectful to her memory." "I don't see the appropriateness of someone like this young rapper being buried with Rosa Parks," William McCauley told freep.com. "She was a person of nonviolence and obviously this young rapper had a different creed when it comes to resolving issues." He never explicitly said he wanted Proof removed, but that's what's in circulation with the rumors. I can't call it, but I’m certainly not in a position to judge. When I go, he's not moving me - I'll haunt him for real! (AHH Rumors)


Do I really need to say anything about that one?

- Dispute snarls Rosa Parks' estate; Family, lawyers haggle over how to divide it


Bless Her Heart For Trying 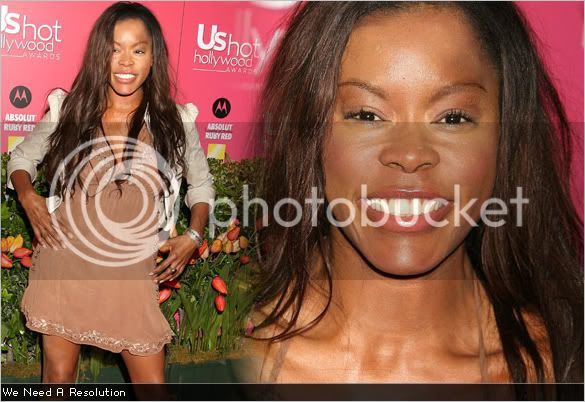 Pancake 31 spokeswoman Golden Brooks was also at the Us Weekly event. As you can see she the HAM factor is so overwhelming that she had to have her own post. I was watching 'Girlfriends' a couple of nights ago scratching my head wondering why the hell she looks so different at these events. Bless her heart.

Sanaa has that same facial expression I give when I fart in public, opps.
2006 US Weekly Hot Hollywood Awards

Where the rest of the list at? People magazine does not care about beautiful black people. 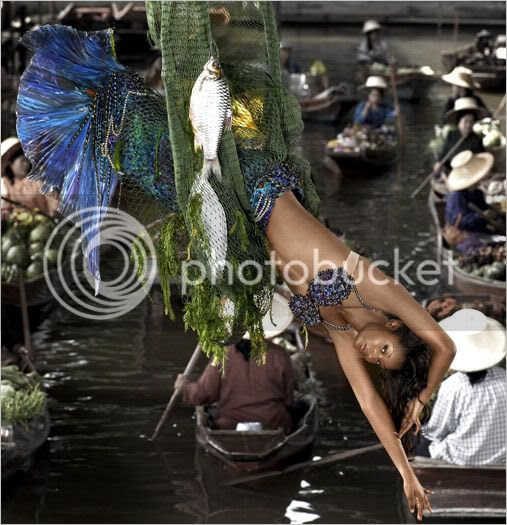 I hope anybody isn't shocked by Nnenna getting the boot last night because I knowI wasn't. I called the shit ten minutes before it came on to the Dealer. The show is coming so predictable. I guess after watching it for six seasons you start to pick up little things.

Jade managed to evaporate my snatch during judging with all that damn talking. They even did a special Jade dictionary on the recap show (thanks Da Real!). I want her "exotic bi-racial butterfly" ass to flap her wings all the way back to America. I also had a hard time looking at Miss Jay since I kept thinking about Nikki's song, ha ha. As always, the pictures from last night episode are up at UPN.
POSTED BY FRESH @
10:06 AM 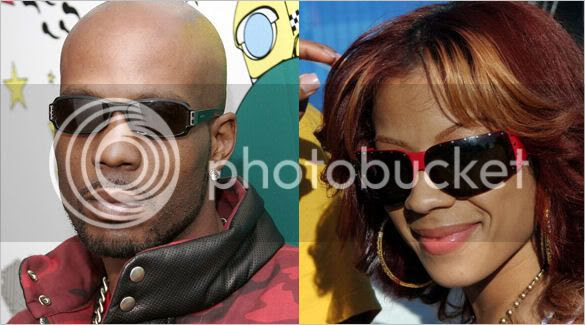 On Monday evening (April 24) BET Networks announced its new approach and programming lineup during its BET Upfronts event at the Manhattan Center Studios in New York City. After introducing Reginald Hudlin as the new President of BET, the network didn't waste any time in making its renewed loyalty to its viewers crystal clear.

"The Black audience does not want to be treated like a late night booty call," * said Hudlin, as he steadily paced like a general on stage Monday. That said, the network rolled out previews to its newest programs, which include a healthy slate of reality-based shows.

The first reality-based show BET introduced will center around the quickly rising R&B star Keyshia Cole. Startime with Cole will capture the personality and soul of the young Oakland songbird, as she further promotes her career. In addition the show will feature exclusive footage of Cole on tour with the likes of Kanye West and R. Kelly.

The second reality show BET previewed Monday night was, DMX: Soul of a Man, which captures the fierce rap superstar in the hot desert of Arizona, as he spends time with his children, speaks to cowboys and oh yea. . . drives fast. (continue) Thanks Roni!

This is going to be interesting. Between DMX praying and crying every 15 minutes to Keyshia buying weed on camera. Negros start your Tivo's! 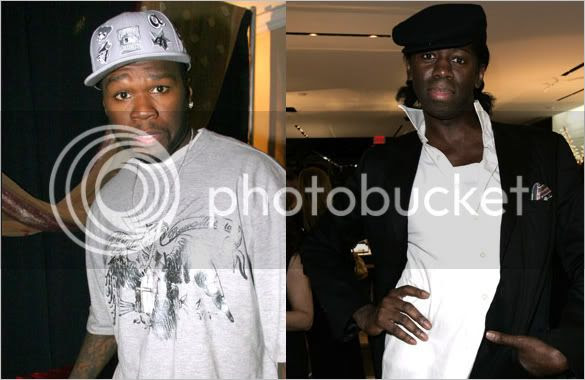 Earlier this morning Breezy made the brilliant obeservation that 50 Cent and Miss Jay had a strong resemblance to one another. My dude Mark shot me this video clip of Curtis on a drag queen friendly French show. Holiday Heart's vanilla sister hands a note over to the host that says "Call me, I'm a hot bitch." Then 5-0 gets all angry black man and argues with the host about who the note is actually intended for. Funny shit! Check it out for yourself. 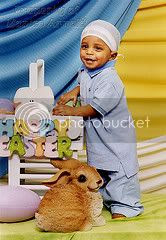 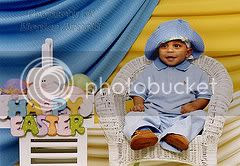 (Picture credits: Sandra Rose)
Before you say anything babies gotta keep up with their wave patterns just like the rest of us. Monica realizes this. Thanks Bama Bred and Shara for the emails!
POSTED BY FRESH @
11:10 AM