I Can Knock The Hustle 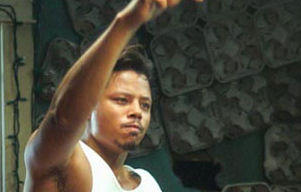 Each time the commerical for Hustle and Flow (hitting theaters tomorrow) is displayed across my television screen a confused look sprawls across my face. As Terrence Howard yells ever so crunkly to "whoop that trick" I pick up my remote control and hit the mute button. Its bad enough I have to deal with the Ying Yang Twins' misogynic rhymes about beating pussy up and 50 telling bitches it get in his car on a daily basis. I'm definantely not trying to fuck with this movie. Yes I realize he a pimp chasing his hip hop dream which I have no personal beef with. I'm just in no rush to run and see this movie. Excuse me for wearing my hip hop feminist cap today but I just can't bring myself to stand behind this project 100 percent. I'm pretty sure it is a solid film - - hell, I'm even sure that Terrence Howard and crew gave a solid award winning performance. Another thing I'm not feeling is Terrence's accent for the movie. Nigga, the people I know from Memphis do not talk anything like that. That negro sounds like the people on my mama's side of the family, the ones with the out-houses and who hang their clothes on a line made of rope. Now that's country. It also doesn't help that he has the Frankie Lymon Why Do Fools Fall In Love hair going on either.

I just can't seem to bring myself to look beyond the lyrics for "Whoop That Trick" and "Its Hard Out Here For A Pimp". I'm a Taurus which makes me stubborn by nature so once my mind is made up and focus on something I'm not trying to change it (not right away at least). Two words come to mind when I hear those lyrics: nigga please. Plus Taraji Henderson looking like the pregnant worker at KFC who drops the chicken and fries don't do anything for me. And we not going to get on his white "hoe" braids, ha ha.

I don't knock anyone else who wants to go support black film making, do you. I'll just sit this one out.