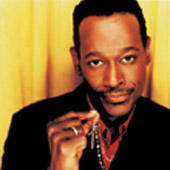 I'm in Queen Latifah circa '91 mode, I had it up to here. Every since Luther passed away there have been so many speculations about his sexuality. Everyone has an opinion and is entitled to that. What do I think? Yeah, I think Luther was gay. In fact, I think him and his best friend Fonzie or whatever the hell were life partners. That's just my theory. If Luther was or wasn't gay so fucking what? Does that stop people from making love to his sensual voice? Hell no. I don't care if Luther was in love with a gay Siemens cat named Spud I would still love him the same. I wasn't going to comment on all of this controversy surrounding Mr. Vandross' sexuality because I didn't think it was worth my efforts until Boogie Oogie put me on to something that I just had to share. I don't wish to offend any of my servants online buds with this article so take advisory in reading it. Wow, I'm so full of shit. I just called Al "Big Gay Al" a few posts ago now I'm saying I don't wanna offend anyone. Oh well.

For two decades, Luther Vandross sang the soundtrack to America's bedrooms, but as much as he touched hearts and stirred loins with music about love and loss, his own romantic life remained mostly a mystery. The black singer who proudly declared that he would never don a blond wig to achieve mainstream fame among white fans, nonetheless hid his own love life to placate his heterosexual female fan base. (read the entire article here)

If you feel like Boogie and myself, you might come to believe that the author is trying to hint towards Luther's death being that of AIDS. No? I'm not feeling that shit. It's one thing to talk shit AFTER someone has gone home (I'm from the country, eff ya'll) so now you wanna say they died from AIDS? Come on! Top add icing on the fucking cake, the author himself is gay. *in my best white boy from Cali voice* Dude, what the fuck?

Chris got knocked the fuck out while he was walking hand in hand with his boyfriend. 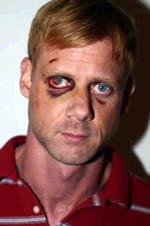 I'm not trying to spark a heated debate or anything with this post, I'm just confused. Maybe someone can help me iron the kinks out.