I know I'm late on this but I just saw this on ESPN yesterday during a late night caking session with The Dealer.

Pacman Jones just can't seem to stay his simple ass out of the strip club. A Nashville woman is alleging that he served her ass up with a two piece and biscuit at Body Tap in ATL. 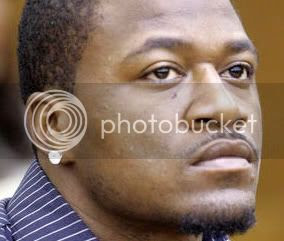 . . . According to the Associated Press, in the latest alleged incident, the Fulton County Magistrate Office said that Wanda S. Jackson, an attorney, asked for an arrest warrant after an altercation at the Atlanta club. [That's right, ya'll cousin picked the right one to fux with this time, a damn LAWYER. Great choice! - - Fresh] Jackson claims she was at the club's office when Jones, who was angry, accused managers of stealing his money and bracelet.

"I was sitting in the office and he lunged at me numerous times in an effort to do grave bodily harm," Jackson wrote in the warrant application filed Jan.7. "Veronica Jones, an owner, went into the hall to deal with a member of his entourage. I followed to gawk. He was in the hall, surprisingly reached over or around a security guard and sucker punched me in my left eye."

Jackson's application will be reviewed Feb. 8, and a determination will be made whether the arrest warrant will be filed.

Regarding Urbanski's lawsuit, Dushoff said, "I just spoke to Adam Jones' attorney and he is accepting service on his behalf and we will go forward with the case against him. We've had a difficult time locating Mr. Jones and we were finally able to get him at least through his attorney."

Dushoff said the shooter, when that person is identified, will also be sued.

Jones has been promised a sentence of one year of probation. He was called an "inciter" of the fighting inside the club. [source]