They're In Love, Ya'll 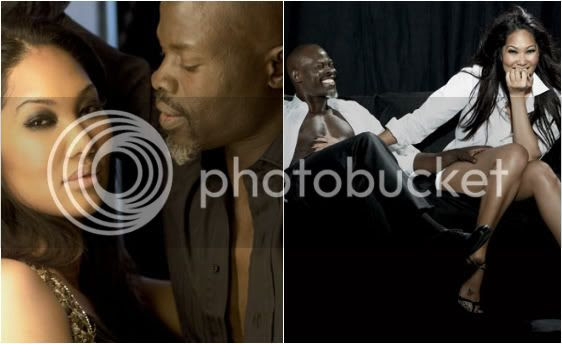 Kimono and Digimon spoke to Harper's Bazaar about their courtship and unconventional love affair. I don't know why these two didn't holla at Jamie Foster Brown for a Sister 2 Sister EXCLUSIVE cover story. You know the couples who land on that coveted cover always last. Read the entire article at the mag's website.

I mean, they aren't Dr. Dre and Michel'le or anything but I guess they are cute together.


Article excerpt after the jump.

This is all a way of getting at the fact that Kimora was not looking for a relationship when she ran into the West African-born fashion model turned Oscar-nominated actor turned Calvin Klein model Djimon Hounsou in L.A. last February. He had just been nominated for his role as an enslaved African fisherman in Blood Diamond.

"When you're not looking, that's when it happens," Kimora says with such authority that, though many people have said so before, it seems true only when it comes out of her mouth. "And I have a lot of hang-ups in life with men. I'm not very trusting," she says enigmatically. "Rightfully so. Read between the lines."

So Kimora gave Djimon her number. "I'm very good at exchanging numbers with people for business, and that's what I did," Kimora recalls. "He said, 'Are you really going to use that number, or are you going to use it for business?' That made me think, Oh." Her eyes dance.

A few days later, Djimon texted her; she called him immediately. "I'm so over that new thing of talking to everyone on the pager," Kimora says. "I'm much more into old-world, intimate conversations on the phone. I like to write letters."