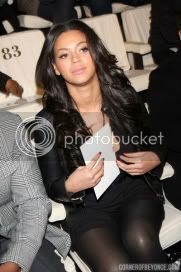 Don't expect to see the Versace men's collection in Bergdorf Goodman this year. On Saturday night, Tommy Fazio, the men's fashion director for the luxury store, showed up to the Versace men's show in Milan and took his usual front-row seat, and all was well until the late arrival of Beyoncé and Jay-Z. According to our insider, the standing-room-only event was pushed even later when Beyoncé's hulking bodyguard didn't have a seat.

Our shocked spy said, "A minion, who obviously had no idea who Tommy was, told him to get up so the guard could sit down." Fazio wasn't pleased and said, "Fine - I don't stand at shows, so please escort me to the door." Afterward, Fazio canceled his post-show appointment with the fashion house. Onlookers were shocked, but Beyoncé was blissfully unaware as she went from the show to the GQ party that followed, where she sat in a corner with Jay-Z and "read the magazine before leaving after 15 minutes." A rep for Versace said, "Obviously there was some confusion with the show, but it had nothing to do with Beyoncé or her bodyguard. It happens occasionally at shows." [source]

I blame Kizzy Rowland's third wheel ass. She took that 'Seat Filler' movie literally and thought that she could post up in the front row, taking Big Beefy the Bodyguard's seat in the process. Her wig crypt employee discount card is soooo revoked, my dude.

Visit Corner of Beyonce to check out flicks from the show and afterparty.