You Got The Juice Now 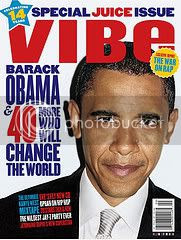 If you haven't already noticed my shameless plug on the side of the site, I nabbed a spot on this year's Juice list. One point for Team Chunk. That's not bad considering I started out 2 years ago not having a clue about this so called "blog game" other than the fact that I enjoyed doing it. So if you have been thinking about creating your own blog, DO IT.

If you're a hater or critic, do your job. By all means. I talk shit about people day in and out on this blog so I would expect someone to do the same to me. If you can dish it out, you can take it in. Bloggers (and people in general) should always remember that. Besides it's only the internet, shit! Log off and take a nap if its that serious.
But on to Barack.

“For the first time in VIBE’s 14-year history, a political figure graces our cover,” says editor-in-chief Danyel Smith in her Editor’s Letter. “It’s time.” In the exclusive interview — by American Book Award-winning author Jeff Chang — Senator Obama and those closest to him open up about personal sacrifice, his teen years in Hawaii, the Don Imus backlash against hip hop, and being “black enough.” The two cover images were photographed exclusively for the September JUICE issue of VIBE by renowned lensman Terry Richardson. Pick up your copy on August 14.