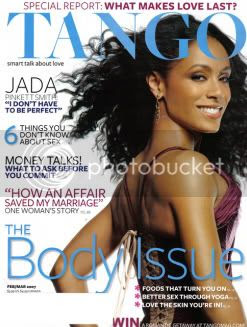 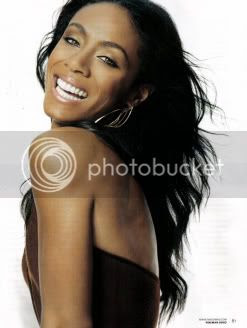 I meant to do this entry on Valentine's Day but my mind was in another place :)

As she celebrates nine years of marriage to Hollywood heartthrob Will Smith -- and her latest film Reign Over Me with Adam Sandler and Don Cheadle hitting theaters in March -- Jada Pinkett Smith has a lot to smile about. Excerpts from the interview under the cut.

Tango: Is there one part of Will's body you just can't get enough of?

Jada: The little curve in his neck that goes into his shoulder--near his collarbone. And I just love his lower adomen--when he's lying down with his arms outstretched and a little piece of his tummy is hanging out. I love that part.

And what part of your body does he adore?

That would be my breast. [Laughs.] And he likes the curve from my torso to my hip.

In another life who would you have a major crush on?

Will and I both have our little Hollywood crushes. For me, it used to be The Rock, but I don't have any new ones. For Will, it was Salma Hayek and then Beyonce.

What's the craziest thing you've ever done for love?

I jumped off a roof into a pool while were were in Jamaica, not knowing I could have broken my neck! I was very out of my mind, and Will was mad at me. He was sitting in a lounge chair when he saw me fall out of the sky creaming, "I love you, Will!" He tried his best to stay mad but he couldn't. He cracked up.

Do you have a relationship role model?

Both sets of my grandparents/ It seemed like they were married for hundreds of years! That's been my staple data--when you're married, it's for life.