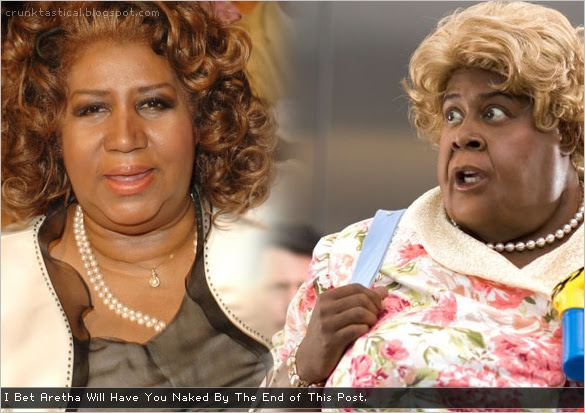 I'm going to hell for that.

Aretha Franklin will join New Orleans singer Aaron Neville in performing the national anthem at next month's Super Bowl. They will be accompanied by another veteran New Orleans musician, pianist Dr. John. "The combination of all three should present a very memorable performance," NFL spokesman Brian McCarthy told the Detroit Free Press. Franklin, Neville and a 150-person backing choir will sing to a taped vocal track to be recorded in Detroit several days before the Feb. 5 game at Detroit's Ford Field, the Free Press reported on its website. (more)
Jacki-O Is One Poe Girl

Jacki-O, who scored a hit with the sexually charged rap "Nookie," has filed for Chapter 7 bankruptcy, declaring debts totaling $144,225 and assets of only $1,340. According to the Miami Herald, Jacki-O (born Angela Kohn), filed bankruptcy late last year, not only to clear herself of debts owed to the IRS and merchants like Verizon and Bally's Total Fitness, but also to be released from her recording contract with Miami's Poe Boy Entertainment. A spokesman for TVT Records says that while Jacki-O's petition seeks to free her from obligations with Poe Boy Entertainment, she is not leaving TVT Records. "An artist would like to live a very fabulous lifestyle," the sexy female rapper told the Miami Herald. "But it takes money to look like money." The female rapper best known for battling Foxy Brown on wax as well as in a rumored studio fight, Jacki-O released her first album Poe Little Rich Girl (Poe Boy/TVT) in 2004.

When I first read this I laughed to myself. This is coming from the same chick who claimed that "pussy paid her bills" right? Obviously her cooter wasn't too hot then. Poe Boy Entertainment, ya'll.

Like many of you I was glued to my television Friday to watch Oprah's interview with Jaimee Foxworth. Hated it! Oprah claimed that she didn't watch any of Jamie's movies for herself but I think that's a lie. Like my homeboy Chris told me the other night, people think that she is black Jesus but that's another post. Couldn't you just imagine Oppy and Gayle sitting down watching "Baby Got Back 53" together sharing a tub of popcorn? That doesn't sound too far fetched to me. The interview didn't really shed any new light on the whole ordeal. If you watched Jamiee's interview on 20/20 last year then you didn't miss much at all. So what did you think of the show?