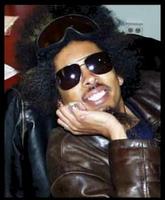 Remember this face? It's Shock G, the one who put the satin on your panties. After years of making wack ass music post Digital Underground he is finally doing hip hop a favor and retiring. Woo hoo! Let's all get together and buy this negro a plaque for his past accomplishments. The Humpty Hump man says music is driving him to do drugs and making him depressed which is understandable. If I had a $40 budget video in rotation on UnCut after having a pretty okay career in the early 90's I would be a melancholy also. I remember back when the "Humpty Dance" came out - - I might've been all of seven years old maybe? Any how, some people just need to realize when their time is up. Of course there are a few people who this general rule of thumb does not apply to but this nigga ain't one. Sorry to be so harsh but no one gives a damn about his "retirement". His ass should be on the next season of The Surreal Life.

Speaking of which, I would like to take this time out to conduct a little poll. If you could watch anyone on the next season of The Surreal Life who would you like to see?

For those who do not know about the show, they basically throw seven "celebrities" (the reason for the quotation marks are these 90 percent of the cast aren't really relevant to the entertainment biz anymore) inside of a house and watch the drama unfold. Past hip hop negros who have been apart of the cast include Flava Flav and Da Brat. During the duration of the show the are presented with certain missions and challenges they must complete. Yadda yadda yadda.