Marion Jones Gets 6 Months in Prison

Allow me to play catch up for a moment. Let's kick off Monday with this dumb ass, shall we? 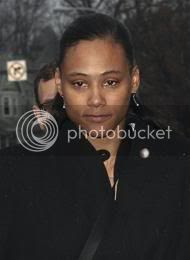 Even Shakespeare couldn't help Marion Jones stay out of jail. Her attorney quoted the bard in asking a judge to be merciful, but the former Olympic track gold medalist was sentenced Friday to six months in prison for lying to investigators about using performance-enhancing drugs and about her role in a check-fraud scam.

Federal Judge Kenneth Karas imposed the maximum sentence suggested in Jones' plea deal, despite entreaties for a probation-only sentence from her and her lawyers.

"I don't think the criminal conduct can be written off as a momentary lapse of judgment or a one-time mistake," Karas said.

Upon learning she was going to prison, Jones leaned over the courtroom railing and softly cried on her husband's shoulder.

The check-fraud scheme was a major crime, and the wide use of steroids "affects the integrity of athletic competition," the judge said. If Jones had told the truth from the start, he said, it would have been a great help to the ongoing investigation into the Bay Area Laboratory Co-Operative, the lab at the center of the steroids scandal in professional sports.

The use of performance-enhancing drugs "sends all the wrong messages to all who follow the athlete's every move," Karas said, apparently referring to children. "Athletes in society have an elevated status. They entertain, they inspire and, perhaps most important, they serve as role models."

Jones, after saying she was scared, nervous and "deeply sorry," had implored the judge "to be as merciful as a human being can be." With a catch in her voice, she asked him not to take her away from her two young sons, the younger of whom is still nursing. [source]

Labels: Sucks To Be You