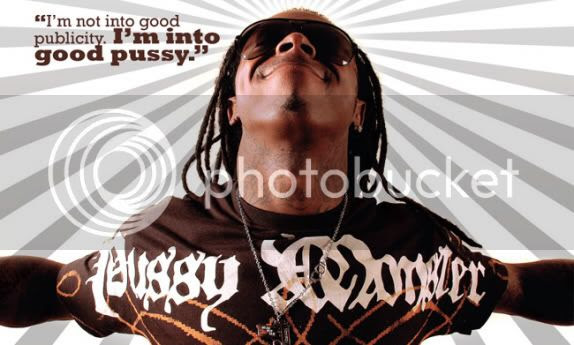 Best shirt ever. It's nice to know that being a pussy monster isn't just a state of mind.
The always quotable Dwayne Carter revealed more about his sex life than I would ever care to know about in Ozone magazine's annual Sex Issue. You're going to need a trip to the free clinic after this. Trust me.

If your phone rings during sex, do you answer?

Hell no. No. No! That's not making love. That's fucking. Fucking is, [humping frantically, picking up the phone] "Hello!? Yeah, nigga!!! Man, you crazy!!" Nah, I wouldn't answer the phone because I be screaming and everything. I'm sensitive, no homo. If you touch me, man. my shit is over-intense. I look at it as a blessing because it makes everything better. [Wooooooooowzeers. - - Fresh]

What's the craziest thing a girl has screamed out to you during sex?

There was this one girl that used to always scream "Aiy! Aiy! Aiy!" and nobody could figure out what it meant. But that was just a jumpoff. When you're making love, nobody's screaming. You're just in each other's ear breathing and shit. I don't do that fucking shit. I'm small, I mean, not my [dick] but my body, my legs and all that shit be hurting afterwards. I got a hernia and everything. My mama was like, "How did you get that" and the doctor said, "Well, it usually comes from strenuous activity. He probably was picking up heavy things." My mama was like, "No, cause he don't pick up a fuckin' thing. He's straining by fucking all them fuckin' girls," tellin' em, "That's what you're doing, having too much fuckin' sex." So I'm layin' there on the doctor's table like, thanks, you might as well test me for AIDS now because she's crazy. But naw, I don't pound like that. That's never been my thing. Animals fuck like that. I'm not an animal. If you wanna be fucked like an animal, go kind a nigga that'll fuck you like that, cause I'm not gonna do it. Not gonna do it!