Michael K is right, photoshop awards indeed. When I become a famous singer/actress/anti-lace front wig activist/talk show host I am going to have someone on payroll whose main job is to photoshop my ass. 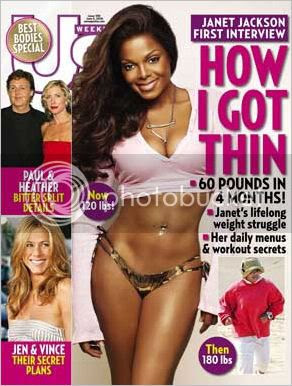 "I worked really hard, and I continue to work very hard," says Janet about her lean new look. "I have to give credit to my parents' genes I suppose, and just working with great people [that] make me look good, and nutrition and a great trainer."

Just six months ago, the svelte Janet was seen in published photos looking like she had packed on a few extra pounds, but the star explains that she gained weight specifically for a movie role. "I put on the pounds for a film I was to do with LEE DANIELS, the producer of 'Monster's Ball,' which a lot of people didn't know," Janet tells Kevin. "They wanted a full-figured woman. She's from the South, a waitress."
(continue)

While Janet is trying to lose weight Beyonce is busy packing it back on.

"It was so difficult, I was starving for six months but I made it through," she revealed at Cannes, where she and co-star Jamie Foxx attended the Dreamgirls premiere. "I fasted. I literally fasted. I drank a drink that gave me all the vitamins I needed and I didn't eat for 14 days and then I just drank protein shakes. It was hard, I felt weak, but I did it.
The article also says that Beyonce was a size 12 before slimming down to a size 8. Um, no? Not buying it. But you already know where the link to this story came from so take it with a grain of salt. Don't trust them new niggas over there . . .