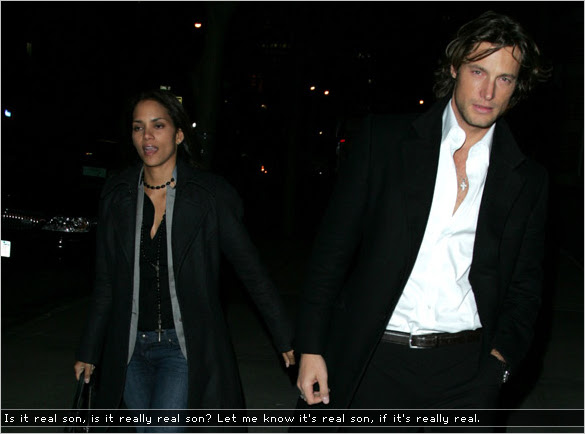 That picture with Halle Berry and that dude is a fake. I use to be on this board where this chick would post pictures of herself that were 'tampered' with and since then I have had a keen eye when it comes to pictures. This is similar to the pic of Johnny Gil and Eddie Murphy.

The picture in question.

Take a look at the floor, it's slightley bent up on the left side, halle's side And it looks 'higher'. There are NO shadows whats so ever also. Its so dark outside but they come out so bright, no flash can do that. The rain coat thing that she is wearing doesnt look right. The only way it can look like that is if there was a lonnnng as slit in the middle

AND lastly, why she all dressed down and dude is all 'casual.' As a matter of fact, his left hand is cut and pasted there. To make it seem like he was wearing a long jacket. The lighting on that hand is off. And it just looks...ahh goddamit Fresh the pic is fake and its so easy to do it when everything is black.

Its the same floor but with paint to make it look like dirty stepped on gum. Check out johnny's right leg. Bottom line...this was a bad job. - Crazy Baby

- Wilson Pickett, the soul pioneer best known for the fiery hits "Mustang Sally" and "In The Midnight Hour," died of a heart attack Thursday, according to his management company. He was 64. (more)

- Dennis Rodman and Tracy BingHAM (as Billy Sunday likes to call her) have been riding the red,blue, and white stripes all the way to the U.K. in the Celebrity Big Brother house. (Thanks Ella)

- Blair Underwood, Lynn Whitfield, Boris Kodjoe, Maya Angelou, and Cicely Tyson will all appear in Tyler Perry's new Madea movie. Click here to view the trailer to visit the film's website. Coming up next: Madea's Funeral Reunion (I'm bullshitting but I could see it happening. Thanks Stylishly Graceful) 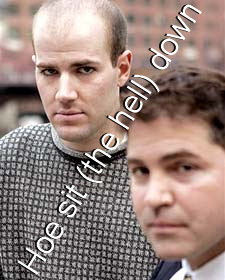 Axelrod's attorney, Jay Paul Deratany, said he planned to sue Davis and his wife for more than $1 million. Deratany said he was writing the papers Thursday for a battery suit against Kendra Davis and a slander case against Antonio Davis, and planned to file them Friday. (more)