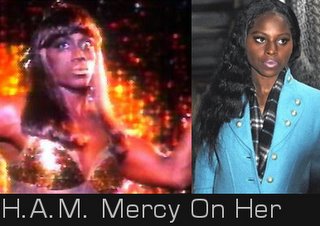 Rapper Foxy Brown is almost totally deaf, her lawyer said Monday. Attorney Joseph Tacopina disclosed Brown's hearing problem after a question about why they exchanged notes while waiting in Manhattan Criminal Court for her case to be called on an unresolved 2004 assault charge. "She's pretty much totally deaf now," Tacopina said. "She can't hear me. We have to write things back and forth. Anything I have to communicate with her now has to be written." Brown, 25, revealed during a court appearance in September that she would soon undergo surgery to try to correct her hearing. Obviously straining to hear questions, she refused to discuss the possible cause of the problem. Tacopina said Monday the prognosis from that surgical procedure is still undetermined, but "hopefully it (the condition) is reversible. She has to undergo another surgery."

Meanwhile, Judge Melissa Jackson adjourned Brown's case until Dec. 23 when, Tacopina said, he expects it will be resolved. Brown, whose real name is Inga Marchand, is charged with misdemeanor assault, attempted assault and harassment.Brown has rejected at least two misdemeanor plea deals that would have let her avoid any jail time for allegedly assaulting two nail salon workers on Aug. 29, 2004, in a fight over payment for a manicure at Bloomie Nails in Manhattan's Chelsea district. Prosecutors alleged that Brown, with a cell phone clutched in her closed fist, attacked and kicked one worker, and hit a second worker in the face. Under the proposed plea deal, Brown would have pleaded guilty to misdemeanor assault and served 10 days of community service. "I'm innocent," Brown said at the time. "I feel like I'm being railroaded." (continue reading at Yahoo via Mr. Irreverent)

+ Mary J. Blige to star in biopic on Nina Simone

+ Lindsay Lohag on the prowl again