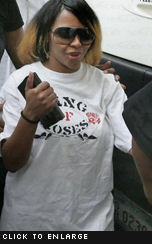 A less than glamorous Lil' Kim wears shades, an oversized T-shirt and jeans, as she arrives at the Federal Detention Center in Philadelphia. The queen bee has a new hive - and she's not liking it. Raunchy rapper Lil' Kim walked into a federal prison yesterday to start a year-and-a-day sentence for lying about a shootout with a rival rap crew.
Kim strode into the Federal Detention Center in downtown Philadelphia without saying a word, but vowed in a statement that she "will come out a stronger, more confident woman.""I am blessed to have so many great things in my life - family, friends and God," said Kim, 30, whose real name is Kimberly Jones. "All will be in my thoughts daily."She groused over not getting assigned to a less-strenuous prison camp. "I am not certain that this constitutes fair and equal treatment," Kim said.

Still, she promised to make the best of her stint behind bars. "Today begins a new saga in my life which I expect to strengthen me and allow me time for reflection," she said.The nation's new most famous federal inmate drove down the New Jersey Turnpike in a convoy of five luxury vehicles from her Englewood home. Trailed by a reality TV crew, she stopped at a rest stop for fried chicken at Roy Rogers before beating a 5 p.m. deadline by 30 minutes.

Only in America will Black people will risk getting into further trouble with the law just for a damn white meat and biscuit combo. Check out the farewell dinner Kim's friends had for her.

They Lootin' - - Made You Look

Business owners return to New Orleans "The Wal-Mart store in uptown New Orleans, built within the last year, survived the storm but was destroyed by looters."They took everything - all the electronics, the food, the bikes," said John Stonaker, a Wal-Mart security officer. "People left their old clothes on the floor when they took new ones. The only thing left are the country-and-western CDs. You can still get a Shania Twain album."If the store had not been looted, it could be open in two weeks, Stonaker said. Now he doubts it will be open by January." (continue)

It's Cheaper To Keep Her

I've been hearing horrific and bombshell allegations regarding R. Kelly's estrangement from his wife Andrea. If these allegations are true and the Kelly's divorce, R. Kelly would be better off agreeing to an out of court settlement. He wouldn't want these allegations to come out in an open arena. Also, we have received word that the tabloids are snooping around. If they decide to do a story, I'm sure the allegations will be included in their account. R. Kelly is worth between $75-$100 million dollars, the Kelly's have been married for several years and they have three children.

Superhead Got Competition?
So the word is Mos Def got on some drugs and married a stripper. Sources say she was a stripper in Toronto for years along with her mother. Yes her mother was a stripper too. The funniest part is that her name was Ecstacy which is what some people say they were on when they got married. This chick has never worked a day in her life but a bag of rappers and ballplayers send her money and the streets are saying she's a professional. Toronto got their very own Superhead. Mos is not her first victim. (shout out to Soli for the tip)

. . . Did anyone catch the new fall line-up last night? While I the opening credits to One on One played I saw that Ray J. would be on the show, so I didn't watch. Oh well. The best show on television last night was this week's episode of spoiled white teens My Super Sweet 16. I'm not going to hype it up because its something you have to see for yourself.