Being Bobby Brown Episode 1 & 2 Summary
This has been a great week for us colored people! First the BET Awards and last night Being Bobby Brown premiered. Yes! Fuck reparations, give us ignorant television programming. So of course at exactly 10 pm I parked my ass in front of my 50 inch Sony plasma 19 inch Sanyo and waited for my hero to appear on the screen. I couldn't wait to see Bobby and Whitney burn each other with crack pipes. . .

A Glossy Synopsis of Episode 1 & 2 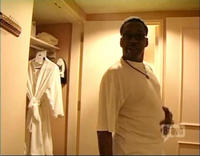 After being released from prison in Boston, Bobby spends some quality time with LaPrincia and Bobby Jr., his children from a previous relationship. Following a tearful goodbye, Bobby heads home to Atlanta and his wife, Whitney, whom he hasn't seen in over 30 days. The family reunites at an Atlanta hotel where we're also introduced to Bobbi Kristina, his daughter with Whitney Houston, and Tommy, Bobby's older brother and manager. Their next stop is Paradise Island in the Bahamas for a relaxing family vacation where Bobby and Whitney are able to find a few quiet moments away from the constant attention of their fans.

Bobby heads to court to face charges that he assaulted his wife last year and is faced with the possibility that he might be immediately forced to return to jail. Whitney attends the hearing in support of her husband and both are relieved with the judge's decision to allow him to go free on bail. To celebrate, Bobby decides to treat Whitney with a visit to a spa followed by a romantic evening out on the town.

Key Observations
- Bobby must have some strong ass genes because all of his offspring looks exactly like him.

- La Princia has braces so they need to go ahead and hook Bobbi Kristina up too.

- Bobbi Kristina is the only chubby kid. Are the rest victims from child support starvation? You be the judge.

- "Hell to the no" is going to become the new pop culture catch phrase. Sorry Paris.

- Whitney and Bobby aren't high all the time. They're painfully human just like the rest of us and made that evident. 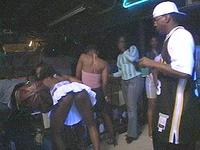 - The Brown family isn't that much different from that of my own. Minus the drug and alcohol use we're pretty much the same.

- Bobby wore the same jersey he had on at a club the night before to breakfast the next morning.

- There's an underline rule in the Brown household, no school on court days. Sweet!

- I always thought that Eddie Murphy might be a freak. Thanks for confirming Whitney.

- They referred to fucking each other numerous times in both episodes. "I want your steak and eggs". Hell to the no!

- Why did Whitney always have some type of fabric drapped around her head 90 percent of the time? She looked like Mother Teresa.

- I can understand why Whitney would curse out some of those people who kept harassing the couple for pictures and autographs. That shit got on my nerves.

Final Thought: The show was very entertaining to say the least but also a depiction of an average family.

Preach!
A Glimpse Into The Future 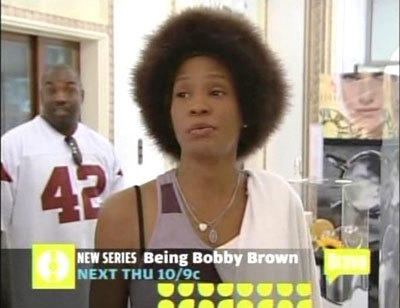