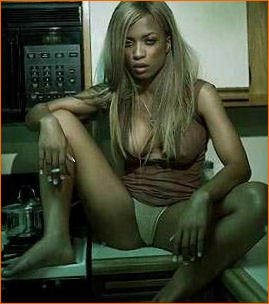 Some of you may have heard the name "Superhead" tossed up in interviews and commentary from some of your rap favs but never knew exactly who she was. I myself did not know until last year when I read an article in Vibe about the former hip hop eye candy. So basically she (Karrine Steffans) has penned a book titled Confessions of a Video Vixen about her romps with different men in the entertainment business.

Here's some juicy tidbits for ya.

Shaquille O'Neal "was charmingly self-effacing about his sexual prowess and wanted to reduce my expectations," she writes. But "compared to other men," she assures readers, "he was nothing to complain about." She says that Shaq was so impressed with Steffans that, the day after meeting her, he deposited $10,000 into her bank account.

A small part in "A Man Apart" allowed Steffans to discover that starVin Diesel was "a beautiful man ... blessed with an enviable eight-pack and an even more enviable [bleep]."

After hearing so much about Fred Durst's stature, she gushed, "to actually hold him ... felt like a privilege."Sex with "insatiable" producer Irv Gotti "became more like a boxing match." During their affair, Steffans claims, Gotti lent her to his friends as he saw fit.

After inviting her to his home at 4 a.m., Sean (P. Diddy) Combs kicked his manservant Fonzworth Bentley out of a guest bedroom so he and Steffans could spend 15 minutes making love. "You're one of the best," she says P. Diddy told her. Steffans writes: "I said the same to him, when, in actuality, he was average." Ouch.

Steffans says she got around to Whitney Houston's husband, Bobby Brown, in late 2002. Steffans says she never saw him do drugs. But she worried for his mental health during a frantic encounter where "he told me he was a member of Al Qaeda and that President Bush was looking for him."She made Ja Rule promise to "always come back." But after he slipped out one morning before she woke up, "I looked around for something to take with me, something that would smell like him but wouldn't be missed. On the floor I found a balled-up sock, and I placed it to my face and got the fix I was searching for." Sniff.

Steffans also tells the whole story of her back-of-the-limo tryst with Usher.

None of the stars' reps we called yesterday responded by deadline. Their handlers can at least take comfort in knowing that, after years of self-destructive star-chasing, Steffans now says, "I am my own woman and look for no one to complete me."

I don't knock her hustle for releasing a book which probably explains in great details what took place in the past. As much as rappers capitalize on their video hoes, they should be able to do the same. Do you. But what the fuck is up with the whole Ja Rule sock thing. Like my Auntie always said, "No man's dick is made out of gold". I've been pretty love struck myself and has never had the urge to pick up any of my man's article of clothing and sniff the shit. And we all knew Bobby Brown was a terrorist for years.