Usher revealed to the Atlanta Journal Constitution that he has a new song in the works featuring T-Pain and Michael Jackson. I can't wait to hear how that shit sounds. 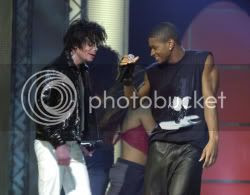 It’s been created, but it’s not recorded," Usher explained to the newspaper. "And as long as Michael is open to it, hey, anything goes.”

The track would be featured on Usher's upcoming album, which he says will be out early next year.

Check out what Usher has to say about fatherhood after the jump.


Meanwhile, the home front has changed drastically for the Broadway performer, who is spending his first holiday season as both a husband and father.

“I’m really like super dad. Really. I really cook for the family," he said. "Now I basically do chicken and broccoli and steamed vegetables, because I’m on this diet. But believe me, I can fry some chicken too … I really clean up. I walk the dog, myself. I burp the baby. I change the diapers. I trim the tree. I’m about to get the things for the tree after this because it’s bare. … I’m super dad. And it’s only begun.”

The artist says he and wife Tameka are still figuring out how to go about releasing the first baby picture of little Usher V. In the meantime, Usher IV says he'll continue to snap his own photos of the baby.

“I’ve become an instant photographer, developing them and everything,” he says.

Tameka runs a tight ship! Got that negroid in panties and all. Ha, I'm just kidding around but its good that he is playing an active role in little Shrek's life. But then again, that what he is supposed to be doing anyway.