The Grinches Who Stole Dick 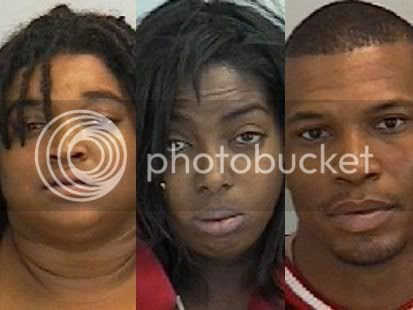 Please pray for your cousins. They need it.

Authorities have charged two women and a man with a weekend attack on three North Carolina football players, which police said was motivated by robbery and included the sexual assault of at least two players.

Police said the players were attacked early Sunday at their off-campus apartment. All three were bound with tape, and one of those charged threatened the players with a knife. None of the players required medical attention, police said.

Taylor and Washington also are charged with one count of first-degree sexual offense. Lewis is also charged with robbery, possession of stolen goods and assault on government officials.

Glenn Gerding, an attorney for Taylor, said he didn't want to discuss details of the case outside of court.

"I'm sure once everything comes out in court, we'll be able to establish her innocence," Gerding told The Associated Press.

Prosecutors said the players and the accused went to the victims' apartment after meeting at a downtown bar. [continue]

Labels: And I Don't Need A Label For This Shit