Rumor Control: Are Star And Al Headed To Divorce Court? 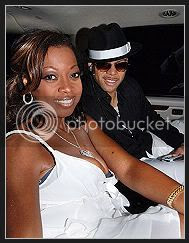 Say it ain't so! I give Star and Al a lot of shit but I would hate to see them seperate. Every since Rosie O' Donnell's name has been added to the mix there have been rumors that not only is Star about to be fired but Al is pissed! Maybe he can get a job as Aqualeo's manager. They have the perfect union in my opinion. He watches her purse and she keeps his tiarra collection free of dust.
Are Star Jones and husband Al Reynolds ready to call it a day? The official word from the couple is that all is well. But another source says they could be close to splitting, with Star considering a divorce lawyer.

The couple has been under scrutiny since their November 2004 wedding, which made headlines for the freebies they solicited from sponsors. And stories that Reynolds dated men before walking down the aisle led many to question whether it was a match made in heaven.

Jones' future as a co-host of "The View" also looks less than secure, especially since her nemesis Rosie O'Donnell was announced as a replacement for Meredith Vieira. Star was absent from her chair Friday, and "View:-eurs are noticing that she has been mentioning Al less on-air lately. A rep for Jones said: "This story is absolutely ridiculous and untrue. Star and Al are very committed to each other and their marriage."
(source)