He's Gonna Feel That One In The Morning 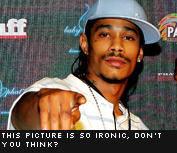 In one of the more bizarre accounts of artist/fan interactions, Bone Thugs-N-Harmony's Layzie Bone almost lost a finger on Saturday when an irate fan tried to bite it off during a scuffle. According to a source close to the group, Layzie, Krayzie and Wish Bone were in Palm Springs, California, to perform at a club and before they could even get to the venue, the show was canceled. Bone's camp said police intervened, fearing gang violence, but a spokesperson for the police said that was not the case and that if the show was canceled it was because the promoter did not obtain the proper permits from the city. In any event, Bone Thugs visited another local club, Havana, and then headed back to their hotel, a Holiday Inn Express in Cathedral City, where the madness occurred. According to the Bone camp, Layzie and his wife were in one of the rooms with some friends and invited some fans up to mingle. There was an undisclosed amount of men and women in the room when one of the men attacked Layzie, apparently disgruntled because of the show's cancellation. The distraught man was able to bite down on one of the rapper's fingers and pierced the skin all the way to the bone. The man was then held by Layzie's friends until police arrived. Police said the attacker was not arrested because Layzie Bone refused to press charges or even cooperate with authorities. Bone was rushed to a hospital, where doctors were able to save his appendage. The fleet-mouthed rapper's finger was stitched up and Layzie is said to be resting in Hawaii with his wife. Despite suffering extreme pain, Layzie is expected to meet up with his group in two weeks to continue recording a new album.

Lil Kim Cut Down To Size In Prison

Lil' Kim has been given a horrid haircut butchering her long locks, according to a prisoner who was released from the Philadelphia detention center just as the rapper was admitted to begin her 366-day sentence for perjury. "She looked like a wreck," Shaki Muhammad, 40, who had just served three months, tells the New York Post. "She didn't look anything like she did on the outside." Muhammad also told the paper that prisoners besieged the 4'11", 30-year-old Kim (real name: Kimberly Jones) with highly personal questions about her sex life and plastic surgery. (more)

Could America's Next Top Model once have had a penis? I'm just saying.