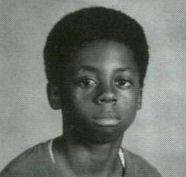 So I'm sitting in front of the idiot box the other day watching Wack City in total disgust. First of all, where in the hell did they find this Mad Linx character? The muthafucka I had the accident with (I got a lot of animosity about that whole ordeal, sorry) can do a better job hosting. Hell, AJ's rasta-impasta looking ass can run laps around his ass. Yeah he's alright but he's not real. True, Tigger did get on my last fuckin nerves with all that "cousin" shit (its bad enough most white people think we're "all related" and "look alike") but this nigga takes the cake. He's not bad on the eyes or nothing like that but looks can't cover lameness. Sorry.

Anyways, I started to notice a pattern that made my eyes bleed. What's up with all these rappers who look slightly retarded? And why most of them gotta be from my region, down south? Hell to the nah!

Webbie - Ahhh, my first victim. What can I say? This negroid looks like the love child of Juvenile + Mannie Fresh. He very well might be with him being from the N.O. and all. First he tells a girl to give him that pussy now he showers her with accolades by calling her a bad bitch. How lovely.

Slim Thug - Fresh loves a tall glass of water. Saying that I mean I have a "thing" if you want to call it that for men who are 6'4" and up. So as I was strolling through the mall last year around Super Bowl time I couldn't help but notice a 6'6" brother from a far. The closer he got the more I started to think to myself (and as Charlie Murphy would say) "wow, this nigga got a big fuckin' head". I didn't know at the time he was indeed "famous" until later on that day. Now I would classified Slim Thugga as being that quiet, soft retard. For example, the one who plays on the football team who's cool with everyone but is in the remedial classes on the end of the hall. Everybody went to high school with one! Nigga got the same teacher all day long . . .

Mike Jones - It doesn't help that he is always repeating his name every other bar. I wonder about him sometime.

Lil Wayne - Where have I seen this face before? Now I'm not going to sit here and front like I've never listened to a Lil' Wayne cd before, so whatever. But I've always thought that this young punk looked pretty damn ugly. My best friend in high school thought totally opposite of myself and was straight sick with his martian looking ass! This girl had Lil' Wayne sheets, posters, shirts, and other misc. bull. Over time however she's calmed down with her love but damn. Why?

Jacki-O - Once again, another rapper who looks dumb as hell. I'm going to put Jacki in a category similar to Slim's. Everyone also went to school with that one chick who could dress her ass off but was dumber than a brick. Walking around in Gucci loafers but can't find the adverb in a sentence.

So, did I miss anybody?